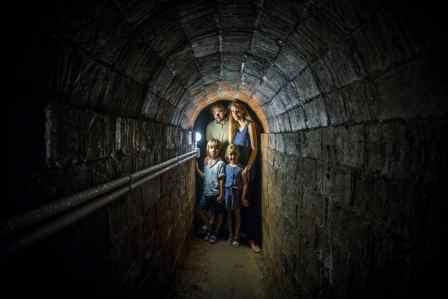 Air-raid shelter built in 1938 to protect the residents from the bombings during the Civil War. It is currently the only public air raid shelter that is preserved in Cambrils, and which has been refurbished and made accessible to create a place connected to historical memories and an element that enhances the culture of peace.

It is an air-raid shelter of tunnels, which runs below Creus Street and is currently 90 metres long. It had several access points, with one located in the middle of the Iglesia de Santa Maria Square and the other located in front of number 20 Creus Street which are both still preserved. There had also been an access from inside the current Vedruna school, which at that time was used as the headquarters of the UGT union; this access is currently blocked.

The gallery is between 8 and 10 metres deep. It’s winding layout was designed to reduce the shock wave effect of the bombs. Towards the middle of the route a ventilation tube was set up so that the conditions of the time spent below were not so tough.

The air-raid shelter is made with the work of the local tile factories and then plastered. It was built during the war by the civilians – by mostly the children, the elderly and refugees – since a large part of the adult men in the city had been called up to the front line. It was never possible to complete the originally planned route, as its southern end was to be connected with the shelter of the Cardenal Vidal i Barraquer street.