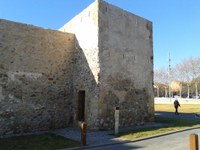 The only tower of the walled enclosure of Cambrils that has been preserved, was most likely built, along with the walls, in the fourteenth century. Its current appearance corresponds to the reconstruction done in the 19th century, as it was damaged during the bombings in the Guerra dels Segadors. This reconstruction of the walls and the tower, carried out in 1835, was due to the explosions of the First Carlina War. At that time the tower had an additional floor from now and also had two floors of loopholes for rifles.

Tradition has it that this tower, after the partial demolition suffered in 1640, was used as a stable for an ox that served as a stallion, for this reason, as from the 19th century, the records refer to it as “Torre del Bou”. Currently it is also known as Torre de la Presó (Prison Tower), since in 1890 it was renovated to be used for this purpose.